So, welcome to The Electric Minor Project. The original idea for this has to go to Transport Evolved’s Nikki Gordon-Bloomfield who, many moons ago, owned a ‘Rose taupe’ (Brown) Morris Minor 1000 that she wanted to convert into an EV. It turned out, however, that the car was more of a shed than even she suspected – and it ended up going to the great scrapyard in the sky. 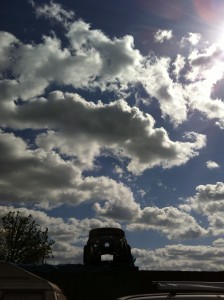 But the idea persisted. And whilst we, here at The Electric Minor Project had considered various conversions(a Vauxhall Viva that turned out to be a nightmare on wheels and a DAF 44 – we’d still like to do that), it wasn’t until we traded up from our selection of non-working EVs (Enfield 8000, prototype G-Wiz) to a Mitsubishi iMiEV that we were really bitten by the electric vehicle bug.

Which is odd, really, given our love for all things Morris, and Alec Issigonis, and their longstanding toying with Electric Vehicles.

But anyhow, the toying had got as far as vague plans being in place when she was fully restored, and thus careful consideration of how she should be wired when she was rewired, and much consideration of what modifications might be required was involved in that restoration. But now we’re into saving up or raising sponsorship for the next phase, the ‘expensive’ phase of buying batteries and charger. And making sure those components are spec’d right. Similarly we’re discussing with our race-specialist restoration team about the transmission components.

The aim isn’t to build a race-suited car though. The aim is to hit the sweet spot of compromise, as Alec Issigonis did in the original Minor. Sufficient speed to cruise on the motorway, sufficient range to travel far and wide, and quiet from the modern electric motor so that all of this can be achieved in comfort.

Expect sporadic updates until the conversion gets going in ernest. We’re also hoping to both film the conversion process, and interview people involved to produce a documentary series as we go. So that’s something for you to look forward to!